Mexico Service Trip: The Roots of a Baja Mission

I had to bend backward and look nearly straight up, shielding my eyes from the Baja sun, to see all the way to the top. Towering far above the yellow, clay-tiled buildings, impressive bell tower, and slender palms, this massive star pine was closer to touching heaven than anything else for miles.

In 1966, a fireman and housewife took an unforgettable journey 178 miles south of the U.S.-Mexico border to the small colonia of Vicente Guerrero. During their visit to that dusty and sunbaked strip of land, Chuck and Charla heard the sound of children laughing amongst the crumbling adobe buildings. But with no children in sight, they were convinced they had experienced a vision; a vision of what could be. Soon after, they bought 72 acres of the surrounding land and built their first children’s home there. And that’s the beginning of their mission—to create a place where children were fed, clothed, cared for. A place where children would laugh often.

Fifty-five years later, Charla’s small children’s home has grown into a massive mission that includes a church, school, clinic, theater, orchard, botanical garden, library, and fire department. And there I was, looking up at a star pine that rose above it all. They say a tree’s roots run even deeper than their branches grow tall. And that this unseen foundation is what keeps the rest strong, stable, and growing even during the wildest winds.

The Roots I Did See 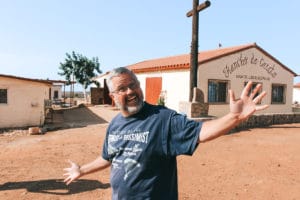 When the USANA Foundation sent us down to the Baja Mission for our week of service, a man named Greg greeted us cheerfully. He had a gray beard and sported a purple T-shirt and witty sense of humor. He showed us around the visitors dorm, gave us a quick run-down of the week’s schedule, and told us a little about himself. A barbecue lover from Kansas, Greg had sold his house and anything that didn’t fit into the pickup truck that carried him down to Vicente Guerrero. We saw Greg occasionally throughout our week at the mission, but we were all too busy to dawdle very long. Still, he always smiled and waved whenever we passed each other, a daily reminder that here was an ordinary man who never could shake the need to serve.

The following day, we toured the mission in its entirety and visited the clinic. A blessing to the entire valley, this modern facility and its team—led by Dr. Ramos—can treat the common cold, X-ray and set fractured bones, deliver newborns, and much more.

We were just about to leave when Dr. Ramos himself stepped out of his office and invited us to see his brand-new, fully functioning operating room. He stood on the smooth, sterile floor and spoke in a quiet, humble voice as he told us how difficult it had been to get all the state-of-the-art equipment across the border. But when he got to the topic of the children and families he has helped over the years, it was clear he could barely contain his pride. You see, Dr. Ramos insists that every child on the mission receives his clinic’s services free of charge.

That afternoon, our group divided up for work assignments around the mission. I was assigned to help in the massive orchard that takes up a large part of the mission property. With my gloves on and rake in hand, I spent several sunny hours clearing leaves around macadamia nut trees and picking guava fruit from branches just barely within my reach. The orchard is a pillar of the mission’s success and resourcefulness. Its macadamia nuts are sold in a nearby café and much of the fruit goes straight to the cafeteria for the kids to enjoy. As I worked, one of the orchard workers, Alan, approached and handed me a large stick and told me to bite it. Seeing I wasn’t convinced, he took a large bite himself and in a just a few moments I too was sucking on the sweet fibers of sugar cane. With a chuckle he swung up into a tree and brought down an armful of more fruit for everyone to try. Born to Mexican parents in Arizona, Alan had returned to his family’s hometown to serve in the mission … and show us gringos how to eat sugar cane.

A few days later, the USANA team piled around 50 heavy bags of food into a van and delivered it to a local school and daycare

center. We handed the food out to mothers as they arrived to pick their children up for the evening. The endeavor was organized by Michelle, one of only two teachers at the school and also a helper on the mission. Despite dealing with a pack of rowdy children  all day, she grinned from ear to ear when we arrived. In fact, she couldn’t stop talking about how much she loved the kids in her class. Eyes shining with optimism, she showed us the small room she hoped would one day be a library for her kids. There were quite few books already, but it was clear Michelle wanted more for her kids and would do anything to fill the shelves.

Near the end of our trip, we divided up again to go out into nearby communities and help mission volunteers teach classes to 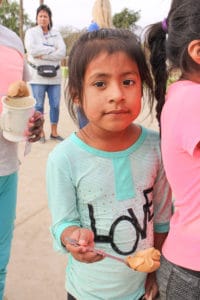 children and give them peanut butter and milk as a nice treat. So there I was, in a van with four fellow employees, with two volunteers—Teresa and Marisol—driving along dirt roads out into the middle of nowhere. When we arrived at a tiny, dustbowl town, Teresa pulled out the megaphone she typically uses to get the children’s attention. She turned it on, aimed it out the window, and … nothing. No sound, nothing. The megaphone was broken. After a few minutes of fiddling, Teresa tossed it behind her and started driving from house to house. Marisol leaned out the van window at each one and called until a child appeared and then ran back inside excitedly to grab a cup for the peanut butter and milk. Twenty minutes later, we arrived at the local schoolhouse with a parade of kids following, cups in hand.

The Roots that Still Need Growing

With time, roots run deep. Some are small, some are thick, and some can push their way through stone, but they all weave together to grow a majestic tree. And while the tree was magnificent to behold, it was the brief glimpses of the roots that really changed me.

Around 100 souls work on the Baja California Mission of Foundation for His Ministry. And even more volunteer their time and money to help. They serve tirelessly so an entire generation can be raised in a loving, healthy, and safe environment; an environment that encourages them to learn and dream. For a week, I and 24 other USANA employees had the privilege to serve and become the roots that help that generation grow. 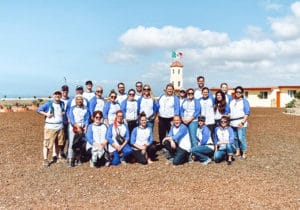 And you can help too. You can become a root that grows the tree, a piece of the foundation of a child’s future. All you need to do is visit the Foundation for His Ministry website to see how you can be a part of the miracles happening in Baja California.

Or you can donate to the USANA Foundation—our mission is to ensure impoverished children and families reach their fullest potential by providing food and nutrition. With 8,500,000 meals provided and 26 countries reached, we’re creating a network of volunteers and helpers that spans the globe.

Making A Difference Around The World
March 25, 2020